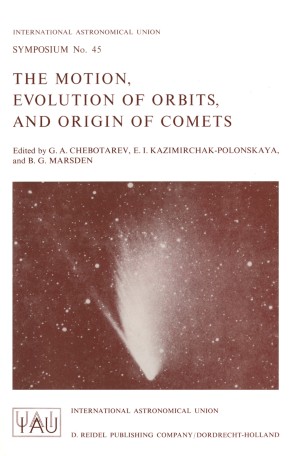 The Motion, Evolution of Orbits, and Origin of Comets

The many papers by Soviet authors have been translated into English by A. P. Kirillov, N. A. Nikiforova, E. A. Voronov, and others. Some of the papers were trans­ lated by the authors themselves. The discussion records have been prepared at the Institute for Theoretical Astronomy by V. K. Abalakin, N. A. Belyaev, A. P. Kirillov, V. A. Shor, E. A. Voronov, N. S. Yakhontova, and others. The three papers published in French have been carefully checked by B. Milet. The final editing has been done at the Smithsonian Astrophysical Observatory, and we thank J. H. Clark, P. D. Gregory, J. E. Kervick, and G. Warren for retyping much of the material. Our special thanks are due to the D. Reidel Publishing Company for the excellent care they have taken in printing these proceedings of IAU Symposium No. 45. G. A. CHEBOT AREV E. I. KAZIMIRCHAK-POLONSKA Y A B. G. MARSDEN INTRODUCTION The idea to organize a Symposium on 'The Motion, Evolution of Orbits, and Origin of Comets' dates back to the IAU thirteenth General Assembly, held in 1967 in Prague. Owing to the impossibility of completing during the General Assembly the discussion on the problem of orbital evolution of comets Professor G. A. Chebotarev, then the newly elected President of IAU Commission 20, initiated the organization of the international symposium in Leningrad where the full scope of cometary problems might be considered from the viewpoint of celestial mechanics.