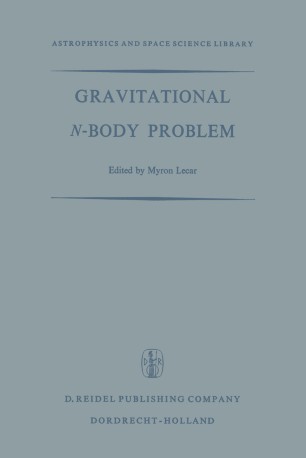 This volume contains the proceedings of the third IAU conference on the Gravita­ tional N-Body Problem. The first IAU conference [IJ, six years ago, was motivated by the renaissance in Celestial Mechanics following the launching of artificial earth satellites, and was an attempt to bring to bear on the problems of Stellar Dynamics the sophisticated analytical techniques of Celestial Mechanics. That meeting was an outgrowth of the 'Summer Institutes in Celestial Mechanics' initiated by Dirk Brouwer. By the second IAU conference [2J, our interest had been captured by the attempts to simulate stellar systems on the computer. Computer simulation is now an essential part of stellar dynamics; journals of computational physics have started in the United Kingdom and in the United States and symposia on computer simulation of many-body problems have become a perennial event [3,4, 5]. Although our early hopes that the computer would 'solve' our problem have been tempered by experience, some techniques of computer simulation have now matured through five years of testing and use. A working description of the six most popular methods is appended to this volume. During the past three years, stellar dynamicists have followed closely the develop­ ments in the related field of Plasma Physics. The contexts of Plasma and Stellar Physics are deceptively similar; at first, results from Plasma Physics were bodily transferred to stellar systems by 'changing the sign of the coupling'. We are more sophisticated and more skeptical now.