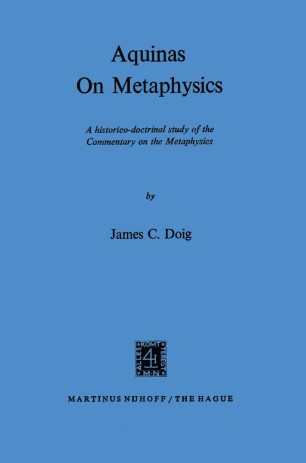 A Historico-Doctrinal Study of the Commentary on the Metaphysics

Thomas Aquinas' Commentary on the Metaphysics has long been con­ sidered by many as one of the most interesting, most rewarding of all his works. Yet strangely enough, there has been no extensive study of this work, at least none that has ever reached print. It is in the hope of partially filling this gap in medieval research that the present study of the metaphysical system of the Commentary was conceived. However, the discussion of the Commentary's metaphysics must simultaneously be an investigation into the reasons which motivated Aquinas in the composition of his work. Did he wish to expose only the theories of Aristotle, or did he simultaneously intend to present his own metaphysical views? Obviously, we must learn the answer to this before we can proceed to disentangle the metaphysical system, or systems, operative in Aquinas' Commentary. Up to the present day this problem, the nature of Aquinas' exposition has not been answered in a manner acceptable to all. Generally speak­ ing, three theories have been advanced. A first one would see the 1 Commentary as an objective exposition of Aristotle. A second opinion views Aquinas' exposition as an attempt to express his own personal 2 theories on metaphysics. And finally, the third view divides within the Commentary paragraphs containing Aquinas' personal thought ...