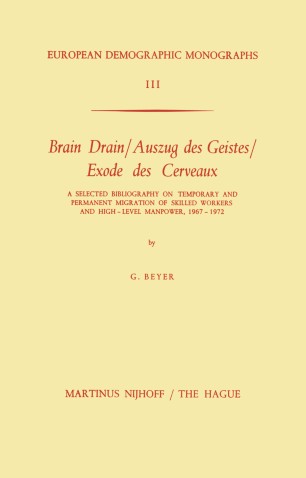 A Selected Bibliography on Temporary and Permanent Migration of Skilled Workers and High—Level Manpower, 1967–1972

In 1967 S. Dedijer and L. Svennigson published their famous bibliography Brain Drain and Brain Gain, (Lund, 1968, index of authors, countries and regions). It contained 415 items from 40 countries and appeared at a time when the debate about the ad­ vantages and disadvantages of the brain drain was at its most intense. But the brain drain is still not a thing of the past - certain­ ly not for Europe. The European countries and those of the rest of the world are in different stages of transition. Industrialization has generally been associated, on the one hand with ever more rapid forms of trans­ portation and other forms of communication, a long-range rise in the per capita income, the exodus from the countryside to the cities and an enormous urbanization process, and the demand for improved social and economic security, on the other. But these characteristics tend to be more relative than absolute. It is not possible to make a distinct division between developed nations, and countries in various stages of development. All countries are constantly undergoing change and are in transition with respect to development. The constant migration of skilled workers and es­ pecially the search for better training and working conditions on the part of academically trained people is inseparable from this process of transition - i. e. from the phenomenon of long-range. permanent change. Fortunately this is not as deplorable as some observers would make it appear to be.