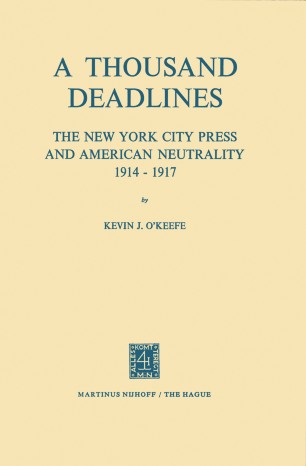 This study is an attempt to chronicle and analyse the attitudes of the New York press in connection with the events of the period from 1914 to 1917 relating to American neutrality. It is based primarily on a day­ to-day study of sixteen daily newspapers in New York City for the period of American non-participation in the First World War. The research involved not only editorial opinion but also news items, feature articles, letters to the editor, book reviews and special commentary. The files of the major New York newspapers of the period naturally constituted the basic sources. In addition to this, use was made of the memoirs, diaries and private papers of editors, publishers and other public figures; the Congressional Record, 1914-1917; Congressional hearings and reports, 1915, 1919, 1936 and 1937; certain British and German materials; books, articles and other secondary sources. The author also drew upon the recollections of New Yorkers active in journalism during the period.