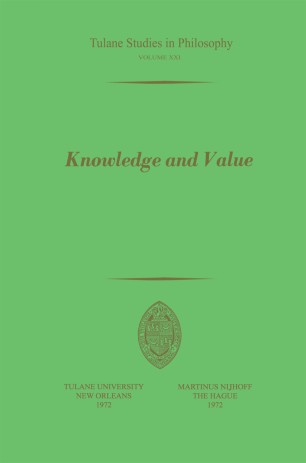 Harold N. Lee retired from Tulane University in June 1970. At first the event was too incredible for us to react. Harold N. Lee is a "character" in the best sense of the term. Surely he would never leave us. He was too much an institution for our institution to proceed without him. But he had attained the mandatory retirement age of seventy, as he himself informed us, and we could not refute the calendar. When at last we came to acknowledge the event, we - his colleagues, profession­ al friends, and former students - realized that we wanted to honor him in a manner more permanent than dinners and parties. So the idea of the present collection of essays dawned. Harold N. Lee taught philosophy at Tulane University for forty-five years. As professor of philosophy at Newcomb College, the undergraduate women's division of Tulane, and head of the Newcomb philosophy department, he carried a heavy burden of teaching and administration. He introduced many of the courses that are now a basic part of the curriculum, such as the courses in aesthetics and symbolic logic. Shortly after World War II he became chairman of the then newly­ formed university department of philosophy and played a major role in the establishment of the doctoral program in philosophy. Throughout the decades he also continued his philosophical researches, and he has published and continues to publish important articles and books at regular intervals.