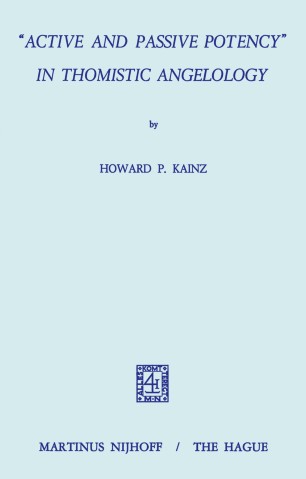 A. "SEPARATE SUBSTANCES" AND lOR" ANGELS"? It is interesting to note that, in an expressly theological treatise such as the Summa theologiae, St. Thomas generally uses the term "angel", in preference to "separate substance"; while in works with a less explicit theological intent - e. g. the Summa contra gentiles and the De substantiis separatis 1 - he generally prefers the term "separate substance". But at any rate there is little doubt that the two terms, "separate sub­ stance" and "angel" have a certain interchangeability and equivalence in the works of St. Thomas. In other words, "the separate substance" is equivalent to "the angel, insofar as its existence and attributes are knowable through human reason alone". And this has led Karl Barth 2 to charge that St. Thomas' angelology is primarily a philosophical presenta­ tion, with little relevance to theology. 1 We might say that these works are "philosophical" insofar as arguments from reason are emphasized in them, rather than arguments from revelation or faith. However, as Lescoe points out (in the Introduction to his edition of the De substantUs separatis, p. 8), the treatise on separate substances leads up to theological subject-matter in Ch. 's XVII ff- namely, an exposition of Catholic teaching as found in Sacred Scripture, the Fathers, and especially Dionysius. And Chenu maintains that the Summa contra gentiles is basically a theological work, because it not only leads up to theological subject-matter in Bk.