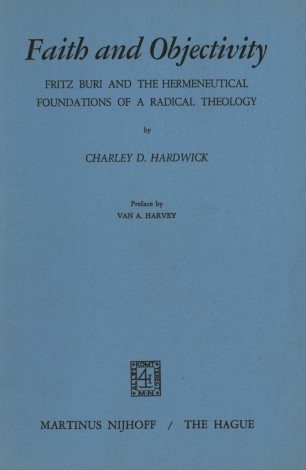 Fritz Buri and the Hermeneutical Foundations of a Radical Theology

In the last decade, too many American theologians have been preoc­ cupied with charting and interpreting in a superficial manner the move­ ments of the newest stars in the Continental theological firmament. This preoccupation contributed much, unfortunately, to that faddism that was so characteristic of American theology in the Sixties, the period imme­ diately following the passing of a generation of theological giants like Barth, Bultmann, Tillich, Gogarten, and the Niebuhrs. There has seldom been a period in which so many promissory notes were issued so care­ lessly onto the intellectual market, notes that were not, and perhaps could not, have been redeemed. Given this temper of the times, it is difficult to account for the almost total neglect of the work of Professor Fritz Burl of Basel, whose "theolo­ gy of existence" is one of the most interesting and impressive contempo­ rary attempts to interpret the myths and symbols of the Christian faith in terms of an existentialist philosophy. Even if one were to apply that most superficial, though for many apparently decisive, criterion of "radicality," one might have expected his work to attract some sustained attention be­ cause Buri has consistently posed a radical solution to most of the hotly debated issues of the times: the problem of demythologization, the mean­ ing of theological language, the problems raised by historical criticism, and the meaning of the historical Jesus for faith, to mention a few.