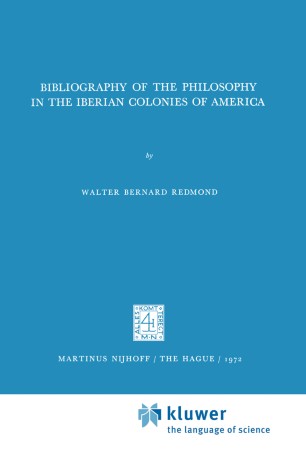 Bibliography of the Philosophy in the Iberian Colonies of America

ORIGIN OF THE PROJECT In Spring of 1968 a research project concerning the scholastic philosophy in the Iberian Colonies of America was submitted to the Institute of Latin American Studies in the University of Texas by Dr. Ignacio Angelelli, of the Department of Philosophy of the same University. I should like to quote some relevant passages from the proposal by way of historical back­ ground. In the last decade, leading philosophical historiography has become more and more interested in the "minor" figures and the "traditional" schools which flourished between 1500 and 1800. Historians of philosophy are interested not only in men like Descartes and Kant, but also in the less brilliant and more "conservative" authors. It is also interesting to note in this regard that the late Professor P. Wilpert (Cologne), editor of the new edition of Ueberweg, intended to divide the section on the Neuzeit into two volumes, one for the major figures and the other for the exponents of the various forms of scholasticism of the period 1500-1800. One of these conservative philosophical movements is what has been called the seconda scolastica, which developed in Catholic countries and particularly in Spain and Portugal. Naturally, this "traditional" thought in Europe after 1500 was bound to have an impact on the Spanish and Portuguese Colonies. Indeed, the amount of scholastic philosophy taught in the American Colonies between 1530 and 1800 is impressive. This fact has not yet been acknowledged by international historiography.