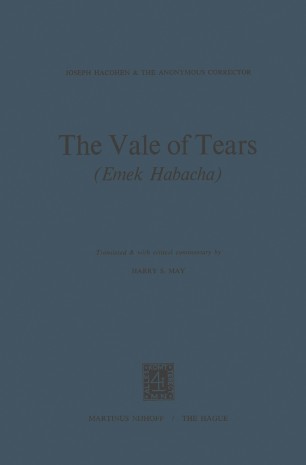 The Vale of Tears (Emek Habacha)

There were several compelling reasons which prompted me to undertake the work of translating and commenting upon the Vale of Tears by Joseph of all, those of Hacohen, the sixteenth century physician and historian. First us who have been teaching in the area of the Middle Ages have noticed over the past several years a distinct upsurge of interest in the field. Consequently, a number of Medieval Institutes, non-denominational in character and attached to major universitites, have sprung up all over the United States trying once more to relate themselves to that age which witnessed - among other things - the unparalleled struggle between two power complexes, the Church and the State. Scholars will also have to consider the Jewish Middle Ages, interconnected with the Christian Middle Ages, which lasted much longer and far beyond the Renaissance in Europe. Most of them tended to gloss over this aspect of Western Civilization which found the Jew in the juggernaut between these two powers. Students of all faiths, ecumenically oriented and truthful to the point of self-abasement are now ready, without a sense of embarrassment, to discuss this long bleak period in the history of European man, where greed, envy, suspicion and religious fanaticism had triumphed over reason and piety. Yet, beyond all of this, there was another consideration which guided me in doing this tedious and often frustrating work: the knowledge of Hebrew has been on the decline in this country.