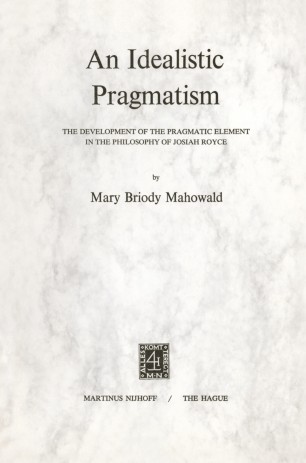 When I first became acquainted with the thought of the American philoso­ pher Josiah Royce, two factors particularly intrigued me. The first was Royce's claim that the notion of community was his main metaphysical tenet; the second was his close association with the two American pragmatists, Charles Sanders Peirce and William James. Regarding the first factor, I was struck by the fact that a philosopher who died in 1916 should emphasize a topic of such contemporary significance not only in philosophy but in so many other vital fields as well (sociology, psychology, politics, theology - to name only a few). Regarding the second, I was curious as to whether the pragmatism of Peirce and James might have influenced Royce during the course of their professional and personal contacts. Similarly, I wondered whether the idealism of Royce might have affected the thought of Peirce and James. To have appeased my curiosity in regard to all three thinkers, however, would have required (at least) three books. As a start I have now appeased it in regard to one. In researching the writings of Royce I found my way to the Houghton Library and to the Archives of Harvard University at Cambridge, Massa­ chusetts, where the unpublished manuscripts of Royce are preserved. (No editing job has yet been done on this bulk of material, though such would certainly be a welcome contribution to American philosophy.