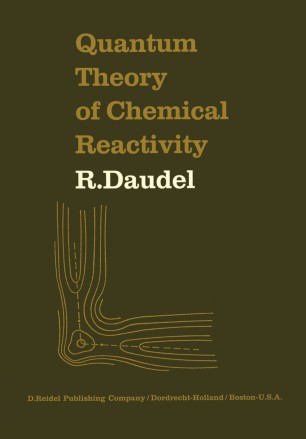 Quantum Theory of Chemical Reactivity may be read without reference to the fact that it is actually the third of three volumes of a treatise on quantum chemistry, the science resulting from the implementation of mathematical laws in the realm of molecular populations. The first two volumes of the treatise, 'Fondement de la Chimie Tbeorique' and 'Structure Electrique des Molecules' were, like this third volume, originally published by Gauthier-Villars; Pergamon published the English translations of these two volumes. I am grateful to D. Reidel Publishing Company for translating the third volume of the treatise into English. Readers familiar with English rather than French now have access to the complete series. This treatise is a reflection of the courses I taught at the Sorbonne from 1950 until 1967 to students in their second cycle (3rd and 4th year) and third cycle (5th and 6th year) working towards a doctorate in this particular field. It is based on the reading of over a thousand articles, and is intended for students as well as for physical chemists, and chemists, research workers and engineers taking an interest in quantum chemistry for its own sake or for its application in industry, pharmacology and the life sciences. Reidel's initiative is particularly valuable because in my opinion Quantum Theory of Chemical Reactivity is the most important of the three volumes of the treatise. Doubtless for this reason only the third volume was published in Japanese by Baifukan, thanks to Professors Hayashi and Sohma.