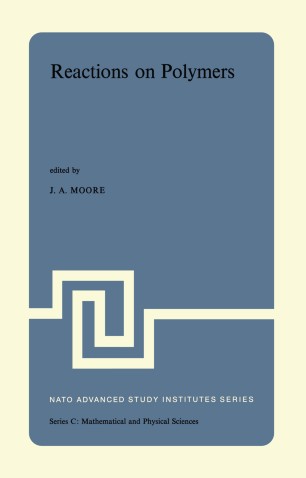 The subject matter of this volume has its roots in the early days of polymer chemistry when gun cotton and Parkesine were first developed. Indeed, its roots can ultimately be traced into anti­ quity, since, in commerce and daily life, man has always carried out reactions on polymers, e. g. in primitive dyeing and tanning operations. In more modern times Prof. Staudinger is commonly acknowledged as the investigator most responsible for the renais­ sance of interest in "polymer analogous" reactions. In recent years it has become apparent that the "black art" of conducting chemical reactions on macromolecules is an area which is amenable to basic scientific investigation. Examples of important developments which have come 'about ,in part ,as a result of this realization have been the advances in molecular biology (which may be rightly considered as the biochemistry of macromo­ lecules) and by such milestone achievements as solid phase pep­ tide synthesis and affinity chromatography. These few selected examples all have macromolecules (biological and synthetiC) in common. The stimulation to wide areas of scientific endeavor re­ sulting from these developments would undoubtedly have occurred· sooner, and certainly with much less difficulty, had the various investigators been aware of the problems attending attempts at performing reactions on polymers. The major purposes of this Advanced Studies Institute were threefold: 1.