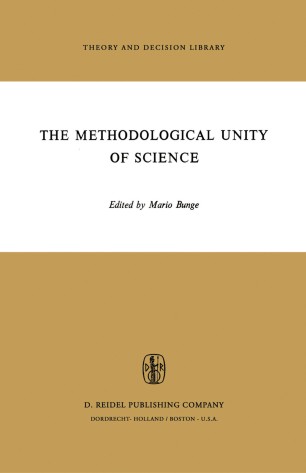 The Methodological Unity of Science

The present volume collects some of the talks given at the Bertrand Russell Colloquium on Exact Philosophy, attached to the McGill University Foundations and Philosophy of Science Unit. It also includes a paper, on Bertrand Russell's method of philosophizing, read at the memorial symposium held at Sir Gorge Williams University shortly after the philosopher's death. All the papers appear here for the first time. Unlike many a philosophy of science anthology, this one is not center­ ed on the philosophy of physics. In fact the papers deal with conceptual and, in particular, philosophical problems that pop up in almost every one of the provinces of the vast territory constituted by the foundations, meth­ odology and philosophy of science. A couple of border territories which are in the process of being infiltrated have been added for good measure. The inclusion of papers in the philosophy of formal science and in the philosophies of physics and of biology, in a volume belonging to a series devoted to the philosophy and methodology of the social and behavioral sciences, should raise no eyebrows. Because the sciences of man make use of logic and mathematics, they are interested in questions such as whether the formal sciences have anything to do with reality (rather than with our theories about reality) and whether or not logic has kept up with the practice of mathematicians. These two problems are tackled in Part II, on the philosophy of formal science.