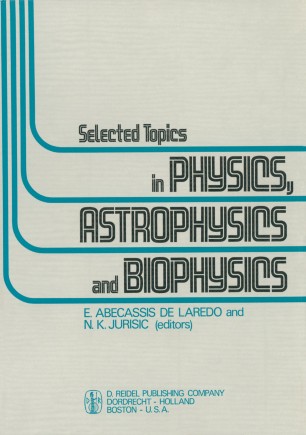 This volume contains the lecture notes of ten courses given at the XIV Latin American School of Physics (XIV LASP) which took place in Caracas, Venezuela, from the 10th to the 28th of July 1972. The LASP is held each year in a different Latin American country. Its purpose is to bring together young Latin American physicists at the doctorate level to attend lectures given by well known scientists. The participants are also invited to give seminars on their research work. The topics of the courses given this year were chosen according to the existent fields of interest in Latin America. Two of these courses, namely those covering astrophysics and biophysics were given in such a way as to be accessible to all par­ ticipants independently of their main field of interest. The XIV LASP has received financial support from institutions in Venezuela and abroad, making possible a meeting of ninety-two Latin American physicists and ten distinguished lecturers. For this we are indebted to the following Institutions: Consejo Nacional de Investigaciones Cientificas y Tecnologicas de Venezuela, Organization of American States, Instituto Venezolano de Investigaciones Cientificas, and its physicists, Universidad Central de Venezuela, Consejo de Desarrollo Cientifico y Humanistico de la U.C.V., Universidad Simon Bolivar, Embassy of U.S.A. in Venezuela, Embassy of France in Venezuela, The British Council in Venezuela, Ministerio de Educacion de Venezuela and the Latin-American Center of Physics.