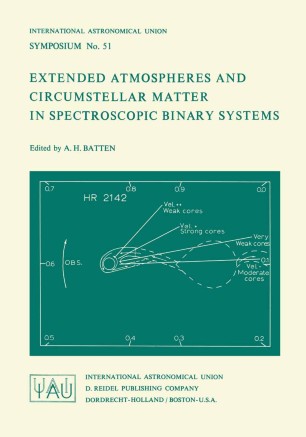 The proposal to organize a Symposium on circumstellar matter and extended atmo­ spheres in binary systems was first made by the Dominion Astrophysical Observatory to the Executive Committee of the International Astronomical Union in the summer of 1969. It received the support of the presidents of Commissions 29 (Stellar Spectra), 30 (Radial Velocities), 36 (Stellar Atmospheres), and 42 (Photometric Double Stars). Approval in principle was given by the Executive Committee almost immediately, and the Committee further suggested that the Symposium be officially designated the Struve Memorial Symposium. Final approval was given at the time of the 1970 General Assembly of the Union. when the dates of the Symposium were set for August or September, 1972. The Organizing Committee set up consisted of K. O. Wright (Chairman), A. H. Batten, K. -H. B6hm, A. A. Boyarchuk, G. Larsson-Leander, and M. Plavec. In addition, J. Sahade and F. B. Wood acted as advisory members. Local organization was entrusted to a committee consisting of A. H. Batten, E. K. Lee, and C. D. Scarfe. The final dates selected were September 6-12, 1972, and the Sym­ posium was held at the Island Hall Hotel, Parksville, B. C. , on Vancouver Island some 90 miles from Victoria. The Organizing Committee attempted to arrange a Symposium of the type in which no contributed papers would be presented and discussion would range as widely as possible over the field covered by the six invited review papers.