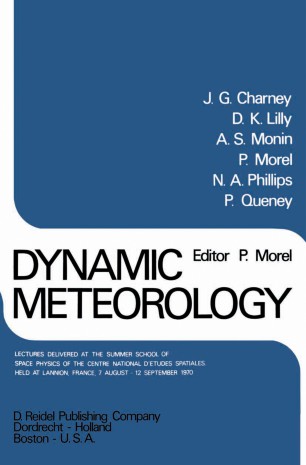 The development of numerical integration techniques and the pioneering efforts of Von Neumann and his associates at the Institute for Advanced Studies (Princeton) have spurred the renewed interest of many leading fluid dynamicists and meteorologists in the theory and numerical simulation of planetary atmosphere and oceans circulations. Their work during the last 15 years, now culminating in the Global Atmospheric Research Program, has led to the possibility of vastly improved weather forecasts as wei I as the development of a ful I fledged branch of the physical sciences: geophysical fluid dynamics. Simultaneously, great strides have been made in developing new instruments, operating from earth orbiting satel I ites, to powerful observe the meteorological phenomena and to determine the state of motion of the atmosphere. Centre National d'Etudes Spatiales (CNES) of France has very significantly contributed to this effort by developing the EOLE navigation and data collection satell ite, launched on 16 August 1971 to interrogate 500 instrumented platforms measuring meteorological para­ meters. It is fitting then, that CNES should have brought together lead­ ing scientists in the field of dynamic meteorology, to participate in its 1970 Summer School on Space Physics.