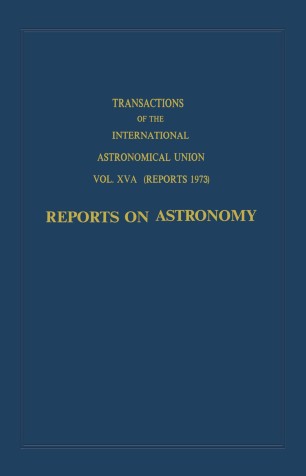 This volume contains the fifteenth tri-annual reports of the Presidents of the forty Commissions of the International Astronomical Union; it refers to the progress in our discipline during the three years 1970, 1971 and 1972. As compared to earlier volumes a gradual change in character is unmistakable. The ever increasing flow of publications, combined with the obvious necessity to keep the Reports at a reasonable size and price level has gradually forced the Commission Presidents to be more selective than before in drafting their Reports. I have certainly stimulated them into that direction - in order that Reports like these be valuable and lasting, it seems imperative that the individual contributions have the character of a critical overall review, where a fairly complete summary is given of the major develop­ ments and discoveries of the past three years, and in which the broad developments and new trends be clearly outlined, while at the same time essential problems for future research are identified. With respect to the latter item I have suggested the Commission Presidents to add to their reports a brief section on scientific priorities for future research in the field of their Commissions. In order to save space I have suggested to Commission Presidents that references to published papers are given on the basis of their number in the published issues of Astronomy and Astrophysics Abstracts. For instance, the indication (06. 078. 019) or (AAA 06. 078.