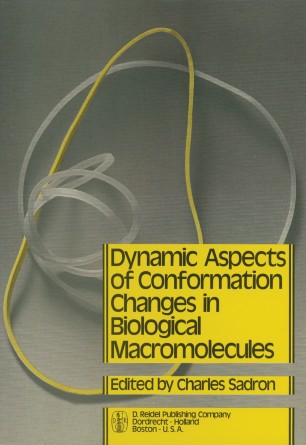 On the day after the 1959 Cambridge Congress, during which the International Union of Pure and Applied Biophysics was founded, a biophysics section was formed within the Society of Physical Chemistry (Societe de Chimie Physique). Since then, three of the Society's annual meetings (the 11th, 17th, and 23rd) were devoted exclusively to the physico-chemical study of biological systems. The first of these was held in June 1961 at a hotel in Col de Voza, at the foot of an alpine glacier above Chamonix. The second, in May 1967, took place in the more learned setting of the venerable rooms of the National Museum of Natural History in Paris. The third - the one dealt with in the present volume - was recently held at Orleans-La Source in the newly built lecture theatres of the young University, which is near the great Institutes of the National Centre for Scientific Research (CNRS), on the Sologne plateau. These three stages are milestones of an evolution which characterises (at least schematically) the explosive evolution of biological physico-chemistry. The first colloquium, with the title 'Deoxyribonucleic Acid: Structure, Synthesis and Functions', actually marks the first contact of the physical chemist with one of the then most prestigious biological macromolecules, the structure of which had just been discovered, and in this way celebrated one of the first and most striking successes of molecular biology.