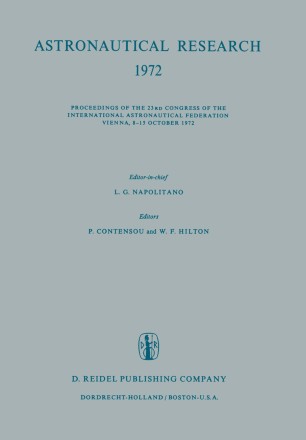 Proceedings of the 23rd Congress of the International Astronautical Federation Vienna, 8–15 October 1972

Space scientists and engineers belonging to the professional societies associated with the International Astronautical Federation gathered together in Vienna to hold the Federation's 23rd Congress. A selected number of papers and critical surveys that were presented and debated at this Congress and which span the widely diversified field of astonautics are collected in the present Proceedings, together with a number of summaries of Round Table Discussions andjor Forum Sessions. As its predecessors in the series, Astronautical Research 1972 constitutes an indispensable reference for several groups of people: those who are actively engaged in astronautics; those who are interested in following and assessing, year by year, the developments in astronautics, its progress, its new directions in research; and those who are concerned with its many applications. Space science and technology are bound to play an increasing role in the immediate future, now that greater effort is being devoted to the exploitation of their relevance to other fields of human activity. Problems posed by the scarcity of earth resources and by their inadequate management, pollution problems, problems created by man's indiscriminate and often irresponsible action in vital sectors of the biosphere can be tackled and successfully alleviated, if not solved, by means of the soft and hard advanced technology developed for space systems.