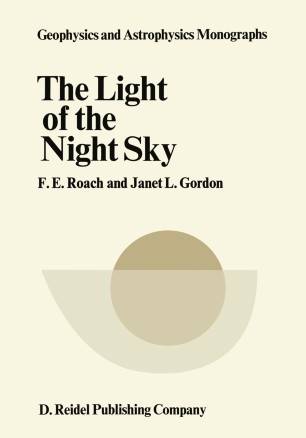 The Light of the Night Sky

Astronomy appears to us as a combination of art, science, and philosophy. Its study puts the universe into perspective, giving a sense of pleasure in its beauty, awe at its immensity, and humility at our trivial place in it. From earliest human history, man has scrutinized the night sky - and wondered and marveled. With unaided eye but perceptive mind, he recognized order in the regular appearance and movements of individual objects, such as the planets and star groups (constellations), in their rhythmic and majestic progressions across the bowl of night. Even in the present era of scientific exactitude, there remains a profound awareness of mysteries beyond our present interpretations. It is only in comparatively recent years, however, that man has recognized that it takes more than conventional astronomy to account for the beauties ofthe night sky. Radiations in the Earth's upper atmosphere provide a foreground light, the study of which has come under a new name, aeronomy. The science of aeronomy has rapidly burgeoned, and the student of the light of the night sky finds that he is involved in an interdisciplinary domain.