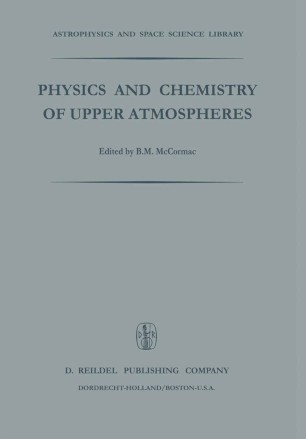 Physics and Chemistry of Upper Atmosphere

Proceedings of a Symposium Organized by the Summer Advanced Study Institute, Held at the University of Orléans, France, July 31 — August 11, 1972

This book contains the lecmres presented at the Summer Advanced Study Institute, 'Physics and Chemistry of Upper Atmospheres' which was held at the University of Orleans, Orleans, France, during the period July 31 through August 11,1972. One­ hundred thirty nine persons from 14 different countries attended the Institute. The authors and the publisher have made a special effort for rapid publication of an up-to-date status of the particles, fields, and processes in the earth's magnetosphere, which is an ever changing area. Special thanks are due to the lecturers for their diligent preparation and excellent presentations. The individual lectures and the published papers were deliberately limited; the authors' cooperation in conforming to these specifications is greatly appreciated. The contents of the book are organized by sub­ ject area rather than in the order in which papers were presented during the Institute. Many thanks are due to Warren Berning, Donald M. Hunten, Edward Llewellyn, J. Ortner, Henry Rishbeth, Harold I Schiff, Lance Thomas, Alister Vallance Jones, and Gilbert Weill, who served as session chairmen during the Institute and contributed greatly to its success by skillfully directing the discussion period in a stimulating manner after each lecture.