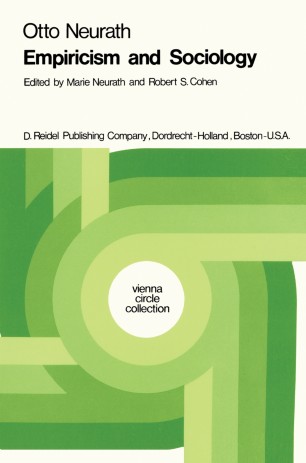 On the last day of his life, Otto Neurath had given help to a Chinese philosopher who was writing about Schlick. Only an hour before his death he said to me: "Nobody will do such a thing for me." My answer then was: "Never mind, you have Bilston, isn't that better?" There were con­ sultations in new housing schemes, an exhibition, and hopes for a fruitful relationship of longer duration. I did not dream at that time that I would one day work on a book like this. The idea came from Horace M. Kallen, of the New School for Social Research, New York, years later; to encourage me he sent me his selection from William James' writings. Later I met Robert S. Cohen. Carnap had sent him to me with the message: "If you want to find out what my political views were in the twenties and thirties, read Otto Neurath's books and articles of that time; his views were also mine." In this way Robert Cohen became ac­ quainted with Otto Neurath. Even more: he became interested; and when I asked him, would he help me as an editor of an Otto N eurath volume, he agreed at once. In previous years I had already asked a number of Otto Neurath's friends to write down for me what they especially remembered about him.