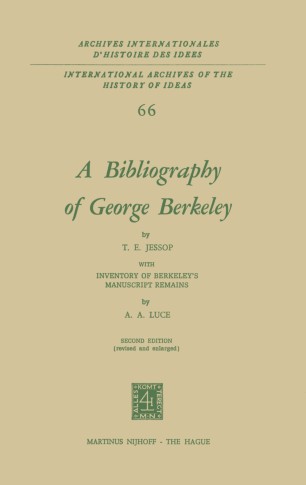 A Bibliography of George Berkeley

With Inventory of Berkeley’s Manuscript Remains

Since the first appearance of this bibliography (1934, Oxford Uni­ versity Press), which has long been out of print, so much attention has been paid to Berkeley that a mere reprint would be inept. Besides bringing it up to date I have added collations of those editions of Berkeley's writings that were published in his lifetime. In doing so I have used a form of description simple enough for anyone to follow yet sufficient to enable librarians to check their catalogues and to identify copies in which the titlepage is missing or mutilated. As before, I have marked with an asterisk throughout the bibliography every book, edition and article that has not been seen by me or, in a few cases, by a competent friend. My primary interest not being bibliographical in the present-day highly technical sense, but philosophical, I have aimed chiefly at (a) providing advanced students (and their hard-pressed advisers) of Berkeley, or of the subjects on which he wrote, with a guide to the materials for research, and (b) displaying the range in time and place, and the direction, of the attention which he has attracted. These two aims account for the classification of the entries under a few general subject-headings and of the philosophical entries under countries, and for the arranging of the entries in each section or subsection in chrono­ logical order, the alphabetical ordering of the authors' names being given in the Index. To facilitate reference and cross-reference each entry is numbered.