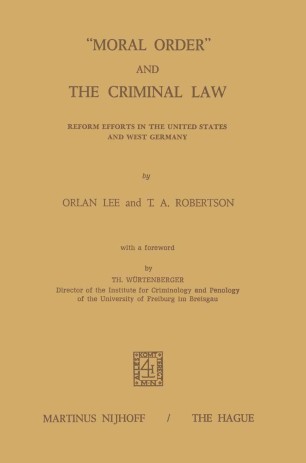 “Moral Order” and the Criminal Law

Reform Efforts in the United States and West Germany

XIV Seen as a whole, however, I regard the work before us to be especially noteworthy precisely because of its illumination of both the social contexts surrounding the law and the ideas which underlie the efforts towards criminal law reform. An analysis of this kind has not appeared until now, to my knowledge, even in the German literature on the subject, so that this book is of great value to ·the German reader as well as the American. B. Particulars In Chapter IV: A the authors give a general introduction into the development of the German criminal law reform. In that connection they recognize the special role of the Christian Democratic (CDU), Socialist (SPD) coalition in the political situation [leading to passage of the reform law]. The authors emphasize the importance of the introduction of a uniform prison sentence [that is to say ·the termination of the distinction between kinds of prison sentences] and the elimination of short term prison sentences, as the main points of the reform in the "general part" of the code. They remark (pages 170; 192) that a uniform concept of the goal of punishment is still lacking, although, when all is said, there is a general agreement on the principle of resocialization.