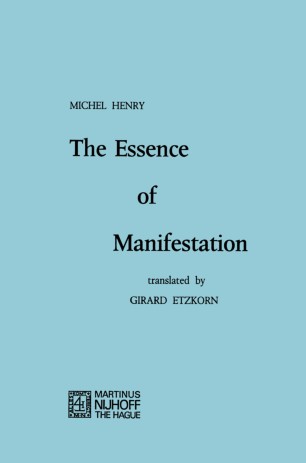 This book was born of a refusal, the refusal of the very philosophy from which it has sprung. After the war, when it had become apparent that the classical tradition, and particularly neo-Kantianism, was breathing its last, French thought looked to Germany for its inspiration and renewal. Jean Hyppolite and Kojeve reintroduced Hegel and the "existentialists" and phenomenologists drew the attention of a curious public to the fundamental investigations of Husserl and Heidegger. If only by being understood as a phenomenological ontology, this books speaks eloquently enough of the debt it owes to these thinkers of genius. The conceptual material which it uses, particn1arly in chapters 1 to 44, outlines the Husserlian and Heideggerian horizon of the investigations. However, it is precisely this horizon which is questioned. In spite of its profundity and achievements, I wanted to show that contemporary ontology pushes to the absolute the presuppositions and the limits of the philosophy of consciousness since Descartes and even of all Western philosophy since the Greeks. An 'External' critique, viz. the opposing of one thesis to another, wonld have no sense whatever. Rather, it is interior to these presuppositions whose insufficiency had to be shown that we placed ourselves; the very concepts which were rejected were also the ones which guided the problem initially.