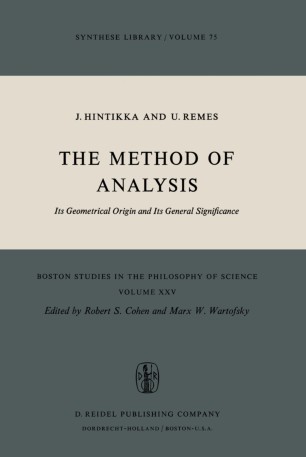 The Method of Analysis

Its Geometrical Origin and Its General Significance

Part of the Boston Studies in the Philosophy of Science book series (BSPS, volume 25)

As official sponsors of the First International Conference in the History and Philosophy of Science, the two Divisions of the International Union of the History and Philosophy of Science owe a great deal to the University of Jyvliskyla and the 1973 Jyvliskylli Summer Festival for the extra­ ordinarily generous hospitality they provided. But there is an additional debt owed, not simply for the locale but for the very substance of the Conference, to the two Finnish scholars who have jointly authored the present volume. For this volume represents not only the first part of the published proceedings of this First International Conference in the History and Philosophy of Science, but also, most fittingly, the paper that opened the Conference itself. Yet the appropriateness of the paper from which this book has resulted opening the Conference lies far less in the fact that it was a contribution by two Finnish authors to a meeting hosted in Finland than it does to the fact that this paper, and now the present book, comes to grips in an extreme­ ly direct way with the very problem the whole Conference was from the outset designed to treat. Generally put, this problem was to bring to­ gether a number of historians and philosophers of science whose contrib­ uted papers would bear witness to the ways in which the two disciplines can be, and are, of value to each other.

Jaakko Hintikka is the author or co-author of thirty volumes and of some 300 scholarly articles in mathematical and philosophical logic, epistemology, language theory, philosophy of science, history of ideas and history of philosophy, including Aristotle, Descartes, Leibniz, Kant, Peirce, The Bloomsbury Group, Husserl and Wittgenstein. He has also been active in international scholarly organizations, most recently as the First Vice-President of FISP, Vice-President of IIP and Co-Chair of the American Organizing Committee of the Twentieth World Congress of Philosophy. He has been Editor-in-Chief of the International Journal Synthese and the Managing Editor of Synthese Library since 1965.