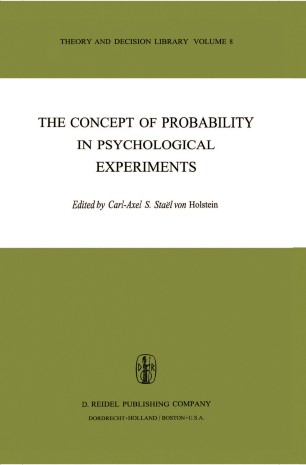 The Concept of Probability in Psychological Experiments

1. BACKGROUND The last twenty-five years have seen a large amount of psychological research in the area of behavioral decision theory. It followed the major breakthrough of decision theory that came with von Neumann and Morgenstern's Theory of Games and Economic Behavior in 1944. The key concepts are probability as a measure of uncertainty and utility as a measure of value and risk. The theory prescribes, given some behavioral axioms, that alternatives should be ranked in accordance with their expected utilities. Psychologists became interested in studying how people's decision behavior agreed with what was prescribed by the theory. Three broad areas for research developed, i. e. , research relating to each of the two concepts of probability and utility, and research relating to the interaction of the two in decision stituations. The papers in this book have been selected to illustrate various aspects of how the concept of probability has been used in psychological ex­ perimentation. The early experiments were generated, as mentioned above, by an interest among psychologists to see how people evaluate uncertainty and quantify it in probabilistic terms. Many of these experiments set out to evaluate subjects' estimates of relative frequencies; these were situations where one had access to 'objective' answers. In the 1960's psychologists changed the focus of their studies to how people revise probabilistic judgments when they receive new information. In recent years there has been a growing interest in the cognitive processes by which people express their judgment in probabilistic terms.