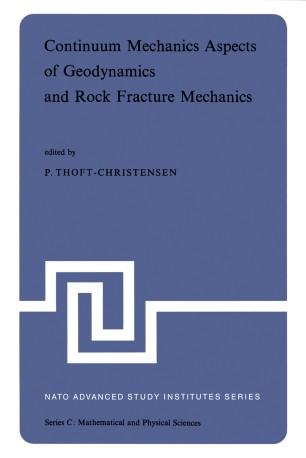 During a NATO Advanced Study Institute in Izmir, Tur­ key, July 1973 on Modern Developments in Engineering Seis­ mology and Earthquake Engineering it emerged that a debate on Continuum Mechanics Aspects of Geodynamics and Rock Fracture Mechanics would be very welcome. Therefore, it was decided to seek NATO sponsorship for an Advanced Study In­ stitute on this subject. The purpose of the new Advanced Study Institute was to provide a link between mechanics of continuum media and geo­ dynamic s. By bringing together a group of leading scientists from the above two fields and participants actively engaged in research and applications in the same fields, it was believed that fruitful discussions could emerge to facilitate an exchange of knowledge, experience and newly-conceived ideas. The Institute aimed primarily at the solution of such problems as connected with the study of stress and strain con­ ditions in the Earth, generic causes of earthquakes, energy release and focal mechanism and seismic wave propagation in­ troducing modern methods of continuum and rock fracture mechanics. Secondly to inspire scientists working in continuum mechanics to open new avenues of research connected with the above problems, and seismologists to adapt modern, advanced methods of continuum and rock fracture mechanics to their work.