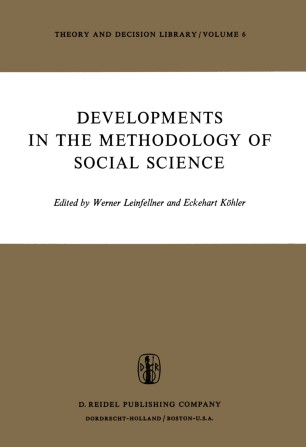 Developments in the Methodology of Social Science

Philosophy of Science deals with the problem, 'What is science?' It seems that the answer to this question can only be found if we have an answer to the question, 'How does science function?' Thus, the study of the methodology of social sciences is a prominent factor in any analysis of these sciences. The history of philosophy shows clearly that the answer to the question, 'How does science function?' was the conditio sine qua non of any kind of philosophy of science, epistemology and even of logic. Aristotle, Hume, Kant, Mill, Russell, to mention a few classical authors, clearly emphasized the primacy of methodology of science for any kind of philosophy of science. One may even state that analyses of the presup­ positions, the foundations, the aims, goals and purposes of science are nothing else than analyses of their general and specific formal, as well as practical and empirical methods. Thus, the whole program of any phi­ losophy of science is dependent on the analysis of the methods of sciences and the establishment of their criteria. If the study of scientific method is the predominant factor in the philosophy of science, then all the other problems will depend on the outcome of such a study. For example, the old question of a possible unity of all social sciences will be brought to a solution by the study of the presuppositions, the methods, as well as of the criteria germane to all social sciences.