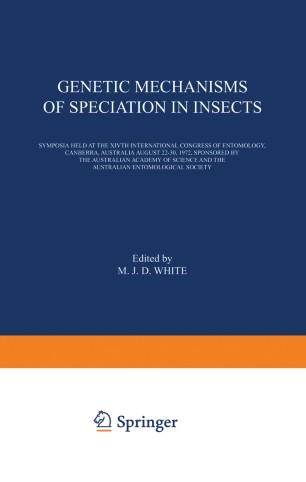 Genetic Mechanisms of Speciation in Insects

Symposia held at the XIVth International Congress of Entomology, Canberra, Australia August 22–30, 1972, sponsored by the Australian Academy of Science and the Australian Entomological Society

Two Symposia on speciation in insects held at the Fourteenth International Congress of Entomology (Canberra, Australia, August 22-30, 1972) are included in this volume. The first, on the more general topic of Genetic Analysis of Speciation Mechanisms, includes four papers on speciation in various groups of Diptera and Orthopteroid insects. The second symposium was devoted to the topic of Evolution in the Hawaiian Drosophilidae; it deals with the explosive speciation of a group of flies with specialized ecological requirements in the complex ecolOgical habitats provided by a recent tropical volcanic archipelago. The Hawaiian Symposium, organized by Professor D. Elmo Hardy, is the latest outcome of a major collaborative research project involving over 20 scientists and about 125 technical assistants over a period of ten years. Some recent books on evolution have taken the standpoint that the funda­ mental genetic mechanism of speciation is relatively uniform and stereotyped and, in particular, that the 'allopatric' model of its geographic component is universally valid. Certainly, this has been a rather generally accepted viewpoint on the part of students of vertebrate speciation. Workers on speciation in insects have tended, in general, to be less dogmatic and more willing to consider a variety of alternative models of speciation. Thus, in the present volume, several contributions adopt viewpoints which are unorthodox or novel. Only time will tell whether their conclusions will turn out to have been soundly based.