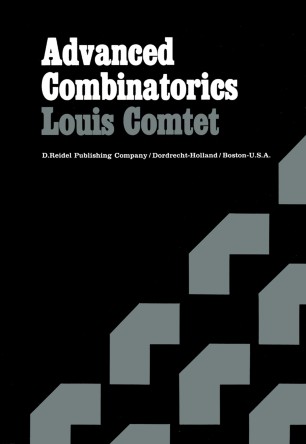 The Art of Finite and Infinite Expansions

Notwithstanding its title, the reader will not find in this book a systematic account of this huge subject. Certain classical aspects have been passed by, and the true title ought to be "Various questions of elementary combina­ torial analysis". For instance, we only touch upon the subject of graphs and configurations, but there exists a very extensive and good literature on this subject. For this we refer the reader to the bibliography at the end of the volume. The true beginnings of combinatorial analysis (also called combina­ tory analysis) coincide with the beginnings of probability theory in the 17th century. For about two centuries it vanished as an autonomous sub­ ject. But the advance of statistics, with an ever-increasing demand for configurations as well as the advent and development of computers, have, beyond doubt, contributed to reinstating this subject after such a long period of negligence. For a long time the aim of combinatorial analysis was to count the different ways of arranging objects under given circumstances. Hence, many of the traditional problems of analysis or geometry which are con­ cerned at a certain moment with finite structures, have a combinatorial character. Today, combinatorial analysis is also relevant to problems of existence, estimation and structuration, like all other parts of mathema­ tics, but exclusively forjinite sets.