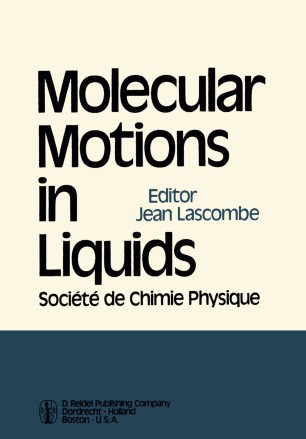 When, in my capacity as President of the Societe de Chimie physique, I opened the 24th Annual Meeting of this Society, devoted this year to 'molecular motions in liquids', I was stirred by a particular emotion. This had two reasons, one general and the other rather personal. I would like to give an explanation in the Foreword to this volume of communications to the Meeting and their ensuing discussions. An essential characteristic of science is its international nature. It is like a symphony composed of contributions by all the countries playing together as an orchestra in unison. Just as a melody has different 'colours' when played by strings or woodwinds, so there exist similar 'colour' differences, subtle ones, between scientific contributions from different countries, rooted as they are in their own cultural history and liable to impoverish the ensemble if they should cease to participate. I have always had an impression of marked 'colour' differences prevailing among American, Russian, Japanese and European contributions, although within the latter group the timbre is very much the same. This is why I have dreamed of a European 'chamber orchestra' in addition to the great world orchestra.