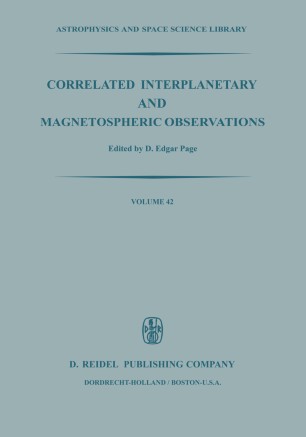 Proceedings of the Seventh ESLAB Symposium Held at Saulgau, W. Germany, 22–25 May, 1973

The 1969 ESLAB symposium 'Intercorrelated Satellite Observations Related to Solar Events' was held at a time when the importance of bringing together measure­ ments made simultaneously in different regions of space was beginning to be appreciated. To-day it is universally accepted that the major experimental steps forward in understanding the physics of the Sun-Earth relationships are likely to be made through pre-planned correlated satellite studies. Such considerations have led to the organisation of the International Magnetospheric Study and the joint ESROj NASA International Magnetospheric Explorer, (Mother-Daughter-Heliocentric) mission. The seventh ESLAB symposium was planned as a follow up to that of 1969 with the aim of deriving maximum benefit from those spacecraft which through good fortune found themselves simultaneously operating in different regions of the magnetosphere and interplanetary space. ESRO had launched in early 1972 its HEOS-2 satellite to investigate fields and particles in the unexplored region far above the North pole of the Earth and it became clear that the interesting new results arriving from that mission could profitably be linked with those from various American and the U.S.S.R. PROGNOZ satellites. The book follows the order of the symposium (unfortunately the PROGNOZ contribution did not materialise) concentrating, through both review lectures and of new experimental results, on the nature of the boundaries between the presentation the interplanetary medium and the magnetosphere and the interaction of each region on the other.