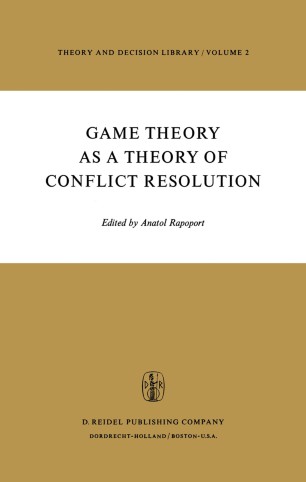 Game Theory as a Theory of a Conflict Resolution

Game theory could be formally defined as a theory of rational decision in conflict situations. Models of such situations, as they are conceived in game theory, involve (1) a set of decision makers, called players; (2) a set of strategies available to each player; (3) a set of outcomes, each of which is a result of particular choices of strategies made by the players on a given play of the game; and (4) a set of payoffs accorded to each player in each of the possible outcomes. It is assumed that each player is 'individually rational', in the sense that his preference ordering of the outcomes is determined by the order of magnitudes of his (and only his) associated payoffs. Further, a player is rational in the sense that he assumes that every other player is rational in the above sense. The rational player utilizes knowledge of the other players' payoffs in guiding his choice of strategy, because it gives him information about how the other players' choices are guided. Since, in general, the orders of magnitude of the payoffs that accrue to the several players in the several outcomes do not coincide, a game of strategy is a model of a situation involving conflicts of interests.