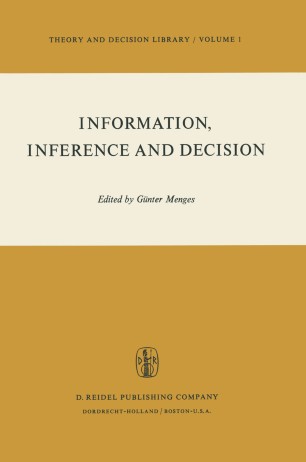 Under the title 'Information, Inference and Decision' this volume in the Theory and Decision Library presents some papers on issues from the borderland of statistical inference philosophy and epistemology, written by statisticians and decision theorists who belonged or are allied to the former Saarbriicken school of statistical decision theory. In the first part I make an attempt to outline an objective theory of inductive behaviour, on the basis of R. A. Fisher's statistical inference philosophy, on the one hand, and R. Carnap's inductive logic, on the other. A special problem arising in the context of the new theory, viz., the problem of vagueness of concepts (in particular in the social sciences) is treated separately by H. Skala and myself. B. Leiner has contributed some biographical and bibliographical notes on the objective theory of inductive behaviour. Part II is concerned with inference philosophy. D. A. S. Fraser, the founder of structural inference theory, characterizes and compares some inference philosophies, and discusses his own and the arguments of the critics of his structural theory. In my opinion, Fraser's structural infer­ ence theory is suited to complete Fisher's inference philosophy in some essential points, if not to replace it. An interesting task for future re­ search work is to establish the connection between Fraser's theory and Carnap's ideas in the framework of an objective theory of inductive behaviour.