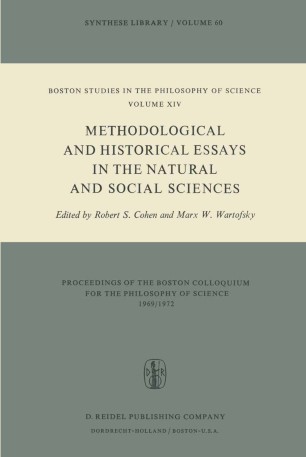 Methodological and Historical Essays in the Natural and Social Sciences

Part of the Boston Studies in the Philosophy of Science book series (BSPS, volume 14)

Modem philosophy of science has turned out to be a Pandora's box. Once opened, the puzzling monsters appeared: not only was the neat structure of classical physics radically changed, but a variety of broader questions were let loose, bearing on the nature of scientific inquiry and of human knowledge in general. Philosophy of science could not help becoming epistemological and historical, and could no longer avoid metaphysical questions, even when these were posed in disguise. Once the identification of scientific methodology with that of physics had been queried, not only did biology and psychology come under scrutiny as major modes of scientific inquiry, but so too did history and the social sciences - particularly economics, sociology and anthropology. And now, new 'monsters' are emerging - for example, medicine and political science as disciplined inquiries. This raises anew a much older question, namely whether the conception of science is to be distinguished from a wider conception of learning and inquiry? Or is science to be more deeply understood as the most adequate form of learning and inquiry, whose methods reach every domain of rational thought? Is modern science matured reason, or is it simply one historically adapted and limited species of western reason? In our colloquia at Boston University, over the past fourteen years, we have been probing and testing the scope of philosophy of science.