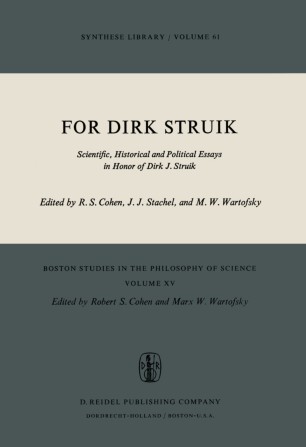 Part of the Boston Studies in the Philosophy of Science book series (BSPS, volume 15)

It is fitting that Professor Dirk Jan Struik be greeted with this melange of mathematical, scientific, historical, sociological and political essays. The authors are also appropriately varied: different countries, outlooks, religions, generations, and we suppose - of course we did not as- different politics too. Many more would have joined us, we know, but the good friends in this book make a fine and representative assembly of the intersection of two (mathematical!) classes: affectionately respect­ ful admirers of Dirk Struik, and the best thinkers of this troubled century. Struik has been among the most steadfast supporters of the Boston Colloquium for the Philosophy of Science, that discussion group which we have been holding at Boston University since 1960, but his luminous collaboration has been welcome, in Boston and Cambridge, for nearly five decades among mathematicians, physicists, philosophical and political thinkers, and especially among the students. It has not mattered whether they have been his own students or not, whether at M.LT. or elsewhere, whether scholars or dropouts, nature-lovers or book worms, anarchists or Republicans, Catholics or Unitarians, Communists or communists, prim or liberated. No doubt he has his preferences! But the main thing for Struik has been to educate and respect the other person.