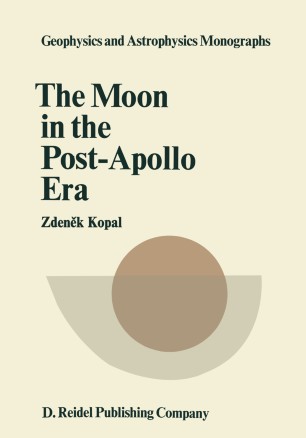 The Moon in the Post-Apollo Era

The aim of the present book will be to summarize the results of the space exploration of the Moon in the past fifteen years -culminating in the manned Apollo missions of 1969-1972 -on the background of our previous acquaintance with our satellite made in the past by astronomical observations at a distance. Astronomy is one of the oldest branches of science conceived by the inquisitive human mind; though until quite recently it had been debarred from the status of a genuine experimental science by the remoteness of the objects of its study. With the sole exception of meteoritic matter which occasionally finds its way into our labora­ tories, all celestial bodies could be investigated only at a distance: namely, from the effects of attraction exerted by their mass, or from the ciphered messages of their light carried by nimble-footed photons across the intervening gaps of space. A dramatic emergence oflong-range spacecraft -capable of carrying men with their instruments not only outside the confines of our atmosphere, but to the actual surface of our nearest celestial neighbour - has since 1957 thoroughly changed this time­ honoured picture. In particular (as we shall detail in Chapter 1 of this book) space astronomy ofthe Moon is barely 15 years old. But relative infant as it is by age, it has already provided us with such a tremendous amount of new and previously inacces­ sible scientific data as to virtually revolutionalize our subject.