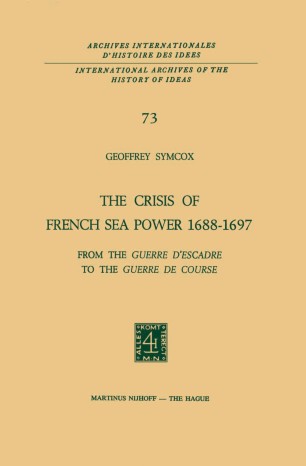 The French navy that fought in the Nine Years War was essentially Colbert's creation. Earlier in the century Richelieu had given France the beginnings of a navy: ships, ports, a corps of officers and an administra­ tive structure. But most of his work was undone by neglect in the years after his death, and the task of making France a maritime power had to begin again under Louis XIV. Colbert's efforts to build a navy were distinguished by the same stubborn energy that he brought to all his other tasks. Behind his desire for naval might lay his vision of France as the first commercial power in Europe, for he saw clearly that mercantile preponderance could never be achieved without the backing of a strong fleet of warships. Trade would follow the flag, as he believed it had for his envied models and perpetual rivals, the Dutch. Soon after Louis XIV's assumption of power, Colbert set about the enOImOUS labour of resurrecting the navy founded by Richelieu; he soon found that the task was really one of creation, virtually ex nihilo. Ships or built, sailors recruited, captains enticed home from were purchased service under foreign flags, bases planned and constructed, an adminis­ trative system established.