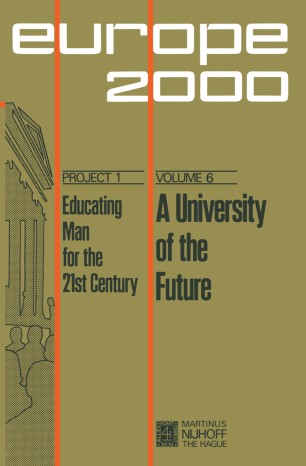 A University of the Future

In instituting its prospective studies the European Cultural Founda­ tion has to some extent gone against tradition. Until now those who were deeply committed to the idea of a European Community looked into the past rather than into the future for bases on which the com­ munity could be integrated. However, if we want a European society to become a reality it must be built on the basis of shared fundamental values. The majority of publications dealing with a unified or inte­ grated Europe have until now accepted that this foundation guarantee­ ing the stability of a future European society should be found in certain common elements of the history of the European nations. The futurological studies instituted by the European Cultural Foun­ dation have not rejected this mode of approach outright. They have respected the historical framework indispensable to any futurological undertaking. But the research and discussions of the groups working within the framework of Plan Europe 2000 offer increasing support to the conviction expressed by Gaston Deurinck in the first words of his introduction to the present study: "The future does not exist .. thf> future is to be created, and before being created, it must be conceived, it must be invented, and finally willed" ..