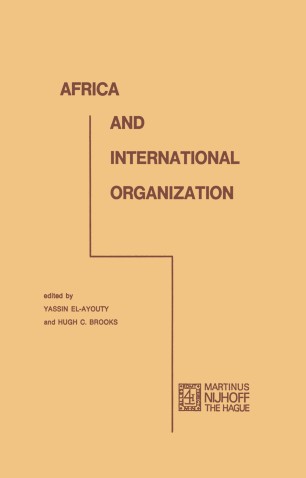 As an emerging Continent, with a rich past, dynamic present and promising future, Africa has an important role to play in the develop­ ment of international organization. Well before Africa Year, 1960, when several African States attained their independence and their rightful place in the community of nations, the various movements for unity and co-operation strove towards the creation of regional international organization. Now more than ever before, nearly two scores of African States, members of the United Nations, the Organization of African Unity and several other sub-regional organizations and arrangements, look upon international organization as an important means for safeguard­ ing their independence, enhancing African identity, forging collabor­ ative bonds amongst themselves and with the outside world, and rais­ ing the standard of living for their populations. It should also be noted that the age of science and technology which is, and should be, based on international co-operation, stimulates fur­ ther Africa's desire to strengthen and work through international inter­ governmental organizations. As Africa faces the I970's, confronting the core problems of colonial­ ism and apartheid in its southern parts, she looks upon the United Nations and the Organization of African Unity as the main vehicles for thought and action. For these considerations, the present book resulting from the St.