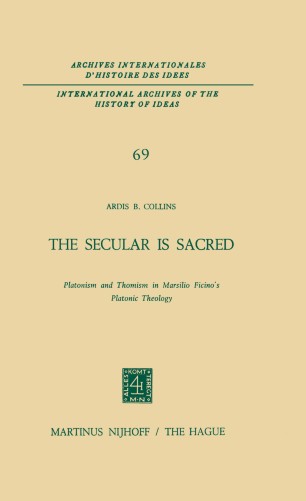 The Secular is Sacred

Part of the International Archives of the History of Ideas book series (ARCH, volume 69)

This book presents a philosophical position examined philosophically. Although it does not go beyond the confines ofFicino's perspective and is governed by standards of historical accuracy, it makes explicit in its explanation ofFicino's text the enduring philosophical questions which are at issue there. True, the book examines in some detail Ficino's relation to his Platonic and Scholastic sources, and this is an issue of primary interest to those who study the history of culture or the his­ torical development of philosophy. However, in Ficino's thought, this issue is also a philosophical issue. Ficino chooses Platonism as his guide because this philosophy retains an explicit and essential orientation to religion. When he takes Platonism as the primary instance of philoso­ phy, he is taking a stand on the nature of philosophy itself. Philosophy necessarily points toward the divinity and hence is necessarily related to the veneration and worship of its object. Christian theology joins Platonic philosophy in this movement toward God, developing more completely the implications of its fundamental insights. And the 1 "splendor of Christian theology" is Thomas Aquinas. Therefore, to examine the relationship between Platonism and Thomism in Ficino's thought is to examine Ficino's position on the unity of philosophy and theology. Scholars writing about Ficino have pointed to three major influences on his thought. The influence of Plato and the neo-Platonists, of course, is readily recognized.