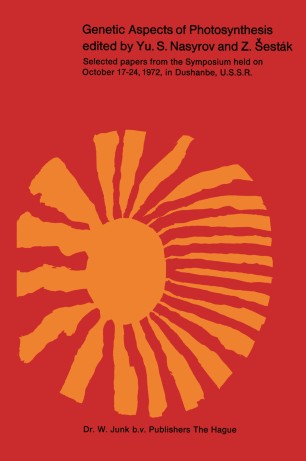 The Symposium 'Genetic Aspects of Photosynthesis' was sponsored by the Insti­ tute of Plant Physiology and Biophysics of the Tajik Academy of Sciences and the Scientific Councils of the Academy of Sciences of the U.S.S.R. on the problem of photosynthesis, genetics and selection, and also by the N.I. Vavilov All-Union Society of Geneticists and Selectionists. The Symposium took place in Dushanbe on October 17-24, 1972. 223 scientists attended, including 209 participants from different parts of the Soviet Union and 14 honoured guests from Australia, Czechoslovakia, Denmark, German Democratic Republic, Hungary and the U.S.A. They represented various fields of biological sciences: molecular biology, bio­ chemistry, genetics, cytology, radiobiology, biophysics, plant physiology, and selection. The chairmen of the ten symposial sessions were the leading Soviet scientists, B.L. ASTAUROV, A. A. NICHIPOROVICH, A. A. SHLYK, Yu. S. NASYROV, V. B. ,EVSTIGNEEV, O. V. ZALENSKI!, B. F. VANYUSHlN, N. P. VOSKRE­ SENSKA Y A, S. V. TAGEEV A and K. V. KVITKO. There were 57 speakers, and a further 40 experimental papers on the problems of genetic control of photosyn­ thesis were displayed on an exhibition of scientific research. Two special round­ table evening sessions were devoted to discussions on the mechanisms of the C 3 and C pathways of photosynthetic carbon metabolism and the structure of pho­ 4 tosynthetic membranes. The symposial sessions were concluded by a general dis­ cussion on the genetics of photosynthesis.