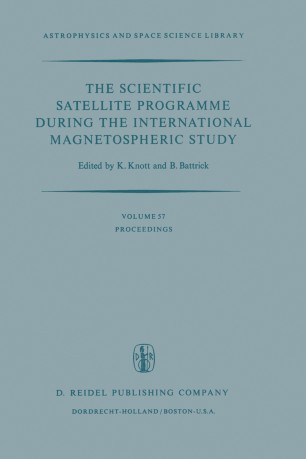 The Scientific Satellite Programme during the International Magnetospheric Study

The 10th ESLAB Symposium was held at Grossenzersdorf near Vienna on 10-13 June 1975 under the title 'The Scientific Satellite Programme During the Inter­ national Magnetospheric Study'. The Symposium was attended by an invited audience of 60 scientists from the ESA Member States, the United States, Japan, Canada and Austria. Following a report by the joint COSPAR-IUCSTP Special Working Group, the International Magnetospheric Study (lMS) is proposed as an international co­ operative enterprise of limited duration, having as its principal objective the achie­ vement of a comprehensive, quantitative understanding of the dynamical processes operating in the Earth's plasma and field environment. In order to accomplish this objective, it is thought to be necessary to carry out simultaneous measurements with nearly identical instrumentation at various points in space. These measurements will need to be made in combination with appropriate observations at or near the Earth's surface. Besides near-Earth observations by ground-based, rocket- and balloon-borne instrumentation, satellite investigations are expected to make an important contri­ bution to the IMS. A number of satellites assigned to magnetospheric research have recently been launched, or will be launched shortly, to be operational during the IMS. The European Space Agency has devoted two of its forthcoming scientific satellites - GEOS and ISEE-B - to magnetospheric and interplanetary research.