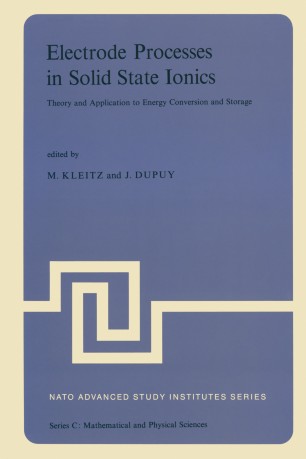 The idea of an "Advanced Study Institute" on the theme of electrode reactions on solid electrolytes was put forward by Dr. J. Dupuy at the meeting of the International Society for Electrochemistry in Eindhoven in September 1973. Through Dr. Dupuy, the Solid State Physics Department of Lyons University offered the Institute possibilities of accommodation in Corsica that seemed particularly tempting. The subject matter appealed to a number of people for a variety of reasons. A great deal of development work on applications comes up against interface phenomena which appreciably reduce anticipated performances. Numerous potential applications of specific electrodes or gauges appear that would benefit from a more systematic approach. From a more fundamental viewpoint, interface phenomena on ionic crystals are the subject of indepen­ dent investigations in quite distinct research fields such as solid state physics and electrochemistry. The choice of an interpretation from among the different models available is very often not a straightforward matter, and an attempt to promote a synthesis by bringing together the proponents of the various "schools" could not fail to be rewarding.