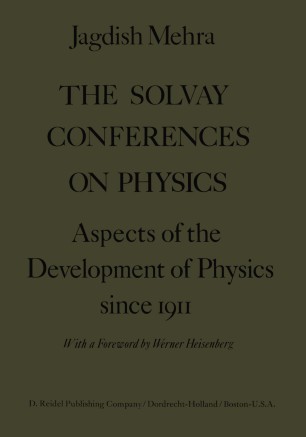 The Solvay Conferences on Physics

Aspects of the Development of Physics Since 1911

Jagdish Mehra's historical account of the Solvay Conferences from 1911 to 1973 demonstrates not only the great influence which these conferences have had on the development of modern physics, but it also shows clearly how far-sighted and well­ planned were the intentions of Ernest Solvay when he took the initiative for organizing a new type of international conferences. In contrast to the conventional meetings in which reports are given on the successful solution of scientific problems, the Solvay Conferences were conceived to help directly in solving specific problems of unusual difficulty. The importance of the quantum structure of Nature had become well under­ stood already by 1911, but at that time there was no hope for an answer to the ex­ tremely difficult new questions posed by the atomic phenomena. The new conferences should therefore be devoted primarily to thorough discussions of such problems be­ tween a small number of the most competent physicists, and Ernest Solvay was guided by the hope that the discussions would eventually lead to a real and substantial progress. The earliest Solvay Conferences which I attended were those of 1927, 1930 and 1933, and they served this purpose extremely well. In 1926 the mathematical formalism of quantum-and wave-mechanics approached its final shape, but the interpretation was still controversial. Schrodinger hoped that his matter waves could be considered as waves in three-dimensional space and time, and that the discontinuous feature of quantum 'jumps' could be avoided thereby.