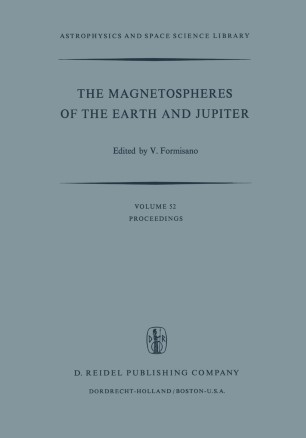 The Magnetospheres of the Earth and Jupiter

Proceedings of the Neil Brice Memorial Symposium, Held in Frascati, May 28–June 1, 1974

The Symposium 'The Magnetospheres of the Earth and Jupiter' (May 28th-June 1st, 1974 in Frascati) was organized by the 'Laboratorio Plasma Spazio' of the CNR, on the occasion of its moving to the Frascati area. The main theoretical topic was to be covered by N. Brice, but he died on January 31st, in a plane crash at Pago Pago (Samoa). It seemed appropriate to all of us to honor Neil Brice by renaming the meeting: 'Neil Brice Memorial Symposium'. The Symposium covered problems of magnetospheric dynamics, of both the Earth and Jupiter, with emphasis on the comparison between the two objects. The collaboration of American scientists participating in the recent NASA plan­ etary missions has made it possible to have new important scientific results presented to and discussed by the scientific community. Of the many people who helped to make the meeting such a success, very special thanks goes to Prof. C. Kennel ofU.C.L.A. whose contribution to the organization of this symposium has been extremely important.