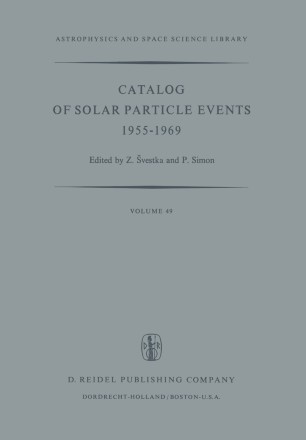 This Catalog originated as a common enterprise of solar physicists and space scientists under the auspices of the Second Working Group of the Inter-Union Commission of Solar Terrestrial Physics (IUCSTP). It is a pleasure to acknowledge the support we received from the IUCSTP president, Dr H. Friedman, and the IUCSTPSecretary, Dr E. R. Dyer during the several years we have spent on this project. The aim of our work has been to assemble all observations of particle events from the first PCA observation in 1955 through two solar cycle maxima up to the end of 1969, in order to preserve these data from the first epoch of the space era in a concise form for use in the future. Because the techniques of observation have very much improved in the present solar cycle, there is a tendency to consider the observations before 1964 as incomplete and out-of-date; one must not forget, however, that the 19th solar cycle greatly differed from cycle No. 20 in the level of its activity, and also may have been the last cycle of strong activity for many decades to come. Therefore, the particle event observations before 1964 'should be compiled in a consistent manner for comparison with later observations, and we believe that the Catalog achieves this. The rapid development of the exploration techniques necessarily results in a significant amount of inhomogeneity in the Catalog, as increasingly smaller events were detected.