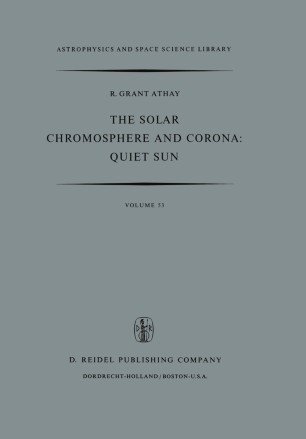 The widespread tendency in solar physics to divide the solar atmosphere into separate layers and to distinguish phenomena of solar activity from phenomena of the quiet Sun emphasizes the wide ranging diversity of physical conditions and events occurring in the solar atmosphere. This diversity spans the range from a neutral, essentially quiescent atmosphere to a highly ionized, violently convective atmosphere; from a domain in which magnetic field effects are unimportant to a domain in which the magnetic pressure exceeds the gas pressure, and from a domain in which the particle motions are Maxwellian to a domain in which an appreciable fraction of the particles is accelerated to relativistic energies. It is now widely recognized that the chromosphere and corona have a common origin in the mechanical energy flux generated in the hydrogen convection zone lying beneath the photosphere. Furthermore, magnetic field phenomena appear to be as vital to the structure of th~ quiet Sun as to the active Sun. For these reasons it appears desirable to present a unified treatment of the entire solar atmosphere, both active and quiet, in a single volume. On the other hand, such a treatise must be very long if it is to avoid being superficial, and it is very difficult for a single author to write authoritatively on such a wide range of topics.